An unhappy house in an unhappy location in the Yorkshire Dales. Richard and Juliette lose their 5 year old and they both cope in different ways. The cover was atmospheric, as was parts of the story. It came across as dated, whether it was meant to be or just how it was written? I didn’t get much sense of brooding menace, so it wasn’t much of a chiller - no doubt other readers will find this novel sinister and evil! I might try one of the authors other books. 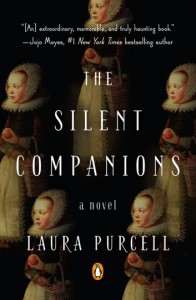 Gothic horror, with the usual cast - creepy house which is dilapidated, new mistress who receives a cold welcome from the few remaining staff, unfriendly villagers and the scene is set for weird goings on! It was ok but didn’t leave me scared of my own shadow which is a must for horror books. It might have worked better as a short story or novella, made it more sinister, something like less is more, sort of thing. Loved the cover, for me, the best part of the book. So many things happen by chance and so did the meeting of writer Connie and the good looking, younger Elise. I knew from the very first few lines that I wasn’t going to like this book (although I’m sure plenty of others will love it) and sadly that’s exactly how it worked out. It was tedious and long drawn out which is a shame as the blurb made it sound great, just the sort of thing I’d enjoy. Fabulous cover I thought. I didn’t care much for any of the characters so had no interest in where they were or what they were doing - sorry! A new series and place with a new heroine, once again, a flawed heroine. To find out what made her like this, simply carry on reading. The killer is now behind bars, so who is replicating the murders and why? Anyone who likes particularly nasty murders with plenty of blood and gore will love this book as there’s no shortage of either. Let’s talk about Kate’s son, who apparently enjoys making sandcastles and paddling in rock pools, but he is 14 years old!! Plus it’s a bit far fetched to think, despite being injured herself, she is able to pick him up and run, as if he were a toddler, not a teenager. In spite of this I still enjoyed the story and look forward to the next episode. I read this as Secrets of the Mist

Maddie finds herself in a small Dorset village and is drawn to an old cottage which she buys. After moving in she hears and sees unexplainable things and is then on a mission to discover the history of her cottage and village. A lovely time slip novel with an enticing cover. I loved the story from start to finish, the wonderful descriptions of Dorset make the book worth reading on its own. Just one niggle - too many mentions of feeding the cat! This is the first book I’ve read by this author and will definitely read others by her. Stella lost her fiancé during WW1 and is distraught. She goes to stay with her sister and finds secrets and strange goings on which helps to take her mind off her own misery. I would have given this book 4 stars because I really enjoyed the story, despite the overlong descriptions of everything. The amount of modern day terminology spoilt it for me - sometimes I thought the characters were from 2017, not 1917! It could have been reduced by about a third and would have been much better, in my opinion. I did enjoy the ghostly goings on an style of writing. Mysteries and strange things going on in an isolated house - now and 1976. Loved the cover and the description, but sadly not much else. I knew as I started reading it that I wasn’t going to enjoy it and then when it took an absolute age to change from 1% to 2%, I knew for sure. Would’ve liked it much better had it been half as long. I’m sure lots of people will enjoy this book, so I’m probably in the minority here. Why is Lisa hanging around Peterborough Station - she’s dead, shouldn’t she have “moved on” to the next stage? This is mainly told by her ghost self but we also learn how she got to be in this situation, after falling for the “good” doctor, Matty, who isn’t really what he seems. It is annoying how once strong women find themselves turning into wishy washy “yes dears”. I thought there was too much emphasis on the minor characters, the people who worked at the station, so I skim read those sections. Despite that I loved the book and the idea of basing it in a railway station of all things! It was captivating, amusing and sad and I was sorry to reach the end. Violet is what was termed as a “surplus woman” when there were so few men left after the devastating First World War. To get away from her overbearing mother she moves a few miles away to the lovely city of Winchester where a whole new world opens up to her. I loved the gentle pace of this book, the work and attention to detail that goes into embroidery in the Cathedral and how bell ringing works. The only real niggle I had was the amount of times the one, truly nasty person crops up whenever Violet was alone which was stretching credibility a bit! Reading this is like taking a step back in time - beautifully descriptive. Who likes to play games? Well it seems quite a few people. It falls to an ex MI6 agent and a psychologist to find some of the missing ones. It sounded interesting especially the different occupations of the investigators. I loved the beginning and the end, but found the middle a bit too dry and therefore a little boring. This pair were slow on working out who was pulling the strings as it was obvious! Also not keen on referring to people by their surnames most of the time and it was confusing to start with. It was an interesting concept and debut. Is this the first in a new investigative series, if so, it would make for something a little different from the usual run of the mill police novels. Might even be a good tv programme too! Linda’s biography - good girl, bad girl, good girl. Gritty and honest and a real eye opener, a view into the darker side of life with villains and gangsters, robberies and guns. She certainly lifts the lid of the more unsavoury underbelly of life! It was fascinating, disturbing and sad. I was riveted to this and couldn’t put it down. Well worth reading if you are interested in crime, the notorious characters from the 60’s and what it’s like to live through that era. Three and a half star rating.
This is the documentation of someone’s decline into dementia. Someone, being Wendy, who had been feeling something wasn’t quite right for a while but carried on regardless, until a series of falls forced her to seek medical help. She writes of her struggles, her methods of coping with every setback, interspersed with letters to her old, lost self. It’s enlightening, uplifting but ultimately depressing as we all know this is something that can never be cured no matter what you do or how much you try. It teaches you to make the most of everything as no one knows what’s lurking around the corner, also to treat people living with this awful disease with respect and always enter their world because it’s impossible for the further advanced ones to enter ours. The author spent 8 years on this study. The book features three very different American women. It was interesting but ultimately I didn’t get on with the style of writing which was stilted and tedious. Also I would have preferred to read each woman’s story separately and found the flicking here and there irritating. I fully expected to be drawn into these damaged women’s stories, but wasn’t, so much so my mind kept drifting off. Sadly this just wasn’t my thing this time. All this book seems to be about is robots and autism. As someone who has always enjoyed previous books by this author, it pains me to say that this one was awful. It was confusing to say the least with one “character” saying “you”, meaning “I”. Why not just use a different font? It really was over long for what actually happened and I skipped page after page and didn’t seem to have missed much! Was it meant to be sci-fi, thriller or what - I couldn’t tell you. Sorry but this was a book I was relieved to finally get to the end of - just not for me this time.